During June 2017, as part of our 15 babies a day initiative, we will share 15 blogs by 15 people who have been affected by the death of a baby. By doing this we aim to show the sheer number of people who are affected by the tragedy of one baby’s death. Visit our 15 Perspectives webpage to view other blogs in the series.

My name is Derek and my partner Liz and I lost Ruby just six hours after she was born at 23 weeks in August 2010. I am so proud of how she battled for life during that time, and we briefly thought she might survive. I grieve not only for her but the potential of all she could have been. 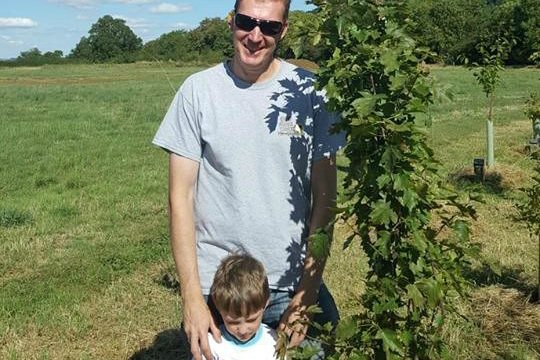 The next few weeks were horrendous and it was just a case of getting through them somehow. It was truly heart-breaking, a word which I find is overused by people who don't know what that actually feels like. Family and friends offered support, and more came from people we barely knew, along with some Sands literature. Then the next few months (stretching into years) became filled with anger firstly because I lost my job, and then we battled a clinical negligence claim for Ruby which was settled out of court.

And yet as time has moved on I found that I had to turn this anger into something more positive, so that something good comes from Ruby's life. In my case this manifests in doing more community related actions, as a reaction against the 'me first' attitude I have so often seen through work, so I am a trustee at my son's nursery. I'm proud of the things that I've achieved in Ruby's memory, including raising several thousand pounds for charity and a near miss in setting a world record when I attempted to hold the largest ever sports quiz. Guinness stipulated we needed 500 people and I managed to recruit 407. I hope to attempt the challenge again and reach the target in the near future!

Losing Ruby has no doubt made me more grumpy and impatient, especially when I see people being treated badly. But I'm also more likely to speak out and do something positive about it now. And painful as life has been, I’m also take the opportunity to help others when I can. The picture you can see is of me and my son Jack – our rainbow baby – and we’re standing by a tree we planted in memory of Ruby.

15 babies die before, during or shortly after birth every day in the UK. 15 too many. We want to reduce this number, but we need your help. Support our #15babiesaday initiative by donating or fundraising now.

My name is Emma, this is my story

A Grandparent's point of view

I am Erica Stewart...