2018 marks 40 years since Sands was founded. To recognise this, we're honouring the achievements of everyone who has worked with us, including volunteers, befrienders, fundraisers and healthcare professionals, to support bereaved parents and reduce the baby death rate in the UK.

Get involved in #Sands40

Want to raise awareness of Sands on social media? Look no further than our digital toolkit for suggested text and banner images. Don’t forget to add #Sands40 to all your posts!

Wear our limited edition 40th Anniversary pin badge - you can order yours today.

Perhaps you'd like to hold an event? Register online to receive posters, balloons and much more! Download our DIY bunting, or a press release from our digital toolkit to spread the word.

Get your friends or colleagues together and walk a mile to help us support bereaved parents. Our Walk a Mile in My Shoes event allows you to share and celebrate memories while raising awareness and vital funds.

Tell us what you’re doing to commemorate #Sands40, to remember the babies that have died too soon. From bake sales and BBQs to picnics and coffee mornings, we want to share your efforts from across the UK. Get in touch on social media, or register your event today!

Together we have achieved so much since Sands was founded by two bereaved parents in 1978. Find out more about our achievements with our interactive timeline. 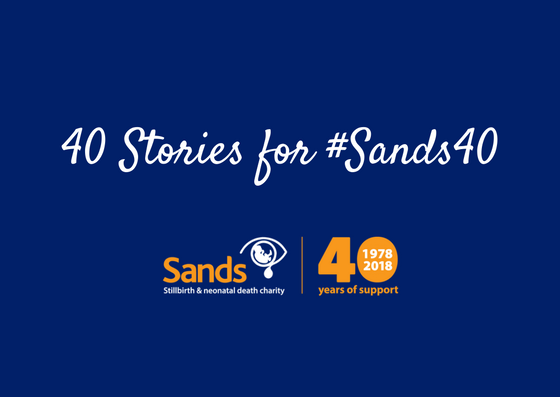 Throughout 2018 we are inviting bereaved parents, family members and friends affected by the death of a baby to share their stories and experiences of loss, including those who are long ago bereaved. 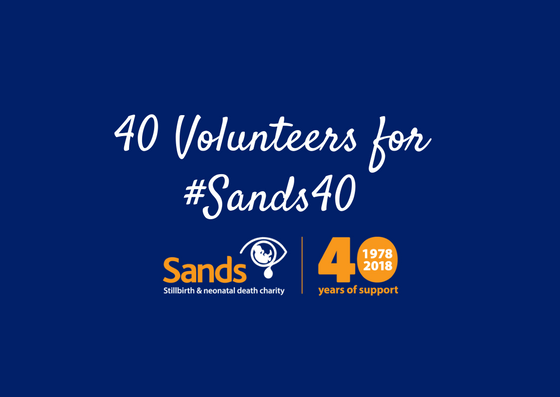 Our volunteers are fantastic! We're celebrating their brilliant achievements throughout 2018 by highlighting 40 of them.

Founded by bereaved parents in 1978

40 years ago, two bereaved mothers, Bel Mooney and Hazelanne Lewis, found there was no support available for them following the deaths of their babies. Realising there were many bereaved parents across the UK left similarly devastated and without support, they founded Sands in 1978.

At that time in the UK, most parents were not allowed to see, hold or bury their babies. No photographs were taken, and they could not put their baby’s name on the stillbirth certificate.

Since then, Sands has grown into a national charity that supports anyone affected by the death of a baby. Over time we have expanded the work we do to include working with healthcare professionals to improve the care parents receive when a baby dies. More recently we have developed a research fund to help us to better understand the causes of stillbirth and neonatal deaths and to reduce the baby death rate in the UK.

Sadly, despite our many accomplishments over the years, more work needs to be done to reduce the number of babies dying, now and in the years to come. Find out more about our commitment to reduce the baby death rate in the UK and ensure every single person affected has access to the care they need, when they need it.

The anniversary also acknowledges Sands continuous efforts to be the voice of bereaved parents, the charity’s impact on the lives of many bereaved parents, improvements in bereavement care and funding vital research.