Sands is a member of the MBRRACE-UK (Mothers and Babies: Reducing Risk through Audit and Confidential Enquiries) collaboration. MBRRACE-UK is a national audit programme and is commissioned by all UK governments to collect information about all late fetal losses, stillbirths, neonatal deaths and maternal deaths across the UK. The programme tracks information about where and why babies and mothers die every year. It takes around 18 months after the end of the year for MBRRACE to collect and analyse all information on deaths in a particular year. This means that its latest report for baby deaths in 2019 was published on 14th October 2021. You can read a summary of the report or access the full report. The perinatal mortality data within this report has also been visualised using an interactive map of the UK which you can explore here.

MBRRACE-UK collects information from all UK hospitals on babies who have died before, during or shortly after birth in a particular year. Their annual reports include national maps showing the difference between rates of baby death in different Trusts and Health Boards; in different Local Authority areas, and different clinical networks, and in different types of unit, across the country compare with eachother.  Trusts and Health Boards who deliver maternity and neonatal care with rates above what's taken as an average are recommended to look at what is happening in their area and to introduce improvements to reduce the number of deaths. These improvements will include using the the Perinatal Mortality Review Tool to understand their deaths better, and service improvement tools such as the Saving Babies Lives Care Bundle. Areas with lower rates are encouraged to reduce their rates to levels seen in some European countries. The UK's rate of stillbirth (for babies after 28 weeks gestation) ranks about middle for similar hi-income countries. Sands feels this is too unacceptably high.

All reports and summaries, including infographic and lay reports, are available here

MBRRACE-UK also carries out what are known as 'confidential enquiries' into the deaths of particular groups of babies - all babies who die of a particular condition, say, or all babies who are stillborn at 37 weeks or more, before birth. This means that clinical experts look at medical case notes to see if there were any problems with the care the mother or baby/babies received to ensure their care followed national and local guidelines.

Two recent enquiries into babies who died, both before, during and shortly after birth towards the end of pregnancy (term) found that better care might have changed what happened for between 6 to 8 out of 10 babies who died. The recommendations of both these enquiries have led to improvements in maternity care.

The confidential enquiry reports with lay and infographic versions are here

The current confidential enquiry is looking at babies who were part of a twin pregnancy and died. This will report in 2020.

A fall in deaths but inequalities won’t go away

MBRRRACE-UK has published its findings on babies who died in 2017, focusing mainly on babies born at 24 weeks or more. The report found there was a 12% fall over 5 years, meaning there were 500 fewer deaths than in 2017 compared to 2013. While this is welcome news, there are still persisting issues with inequality and women whose babies are at risks of dying continue to be at greater risk. In a snapshot, the report’s findings are:

The MBRRACE-UK system has developed several innovations in the past year, not least a real-time data monitoring tool which means that provided Trusts and Health Boards report their deaths soon, clusters of similar deaths in a Trust or unit can be identified earlier and action taken.

“The fall in baby deaths, reported by MBRRACE today, means that one less family every day suffered the tragedy of their baby’s death in 2017 compared to 2013; today 14 babies, rather than 15 die before, during or soon after birth,” said Clea Harmer.

“This fall would not have come about without the passionate and concerted effort of many people,  including many parents, to raise awareness and improve care. But there can be no pause to our determination to end all avoidable baby deaths. The UK is still in the bottom half of the hi-income country league table for its stillbirth rates and neonatal deaths remain largely static. Meeting the government’s ambition to halve all deaths by 2025 is remote at current rates of progress.

“Rapidly increasing our rate of decline to meet that ambition means a far greater focus on resourcing and supporting staff, sharing good practice, research and learning. These vital elements to implementing change are still hugely variable, depending on where you live as a pregnant woman, and where you work, as a health professional. Meanwhile, inequality remains an urgent issue – with newborn babies from Black, Asian and ethnic minority groups far more likely to die.

“This year’s report, for the first time, gives added focus to those women who are at greater risk of their babies dying and shows us who their health providers are.

“In recent years, governments across the UK have committed to tackling inequalities and public health and making Britain’s services for women, their babies and families safer. Today’s report shows us that while we understand the challenges and we know the interventions, we are still a long way off improving health and care for every family, and making those ambitions a reality.”

To see the full report go to: www.npeu.ox.ac/mbrrace 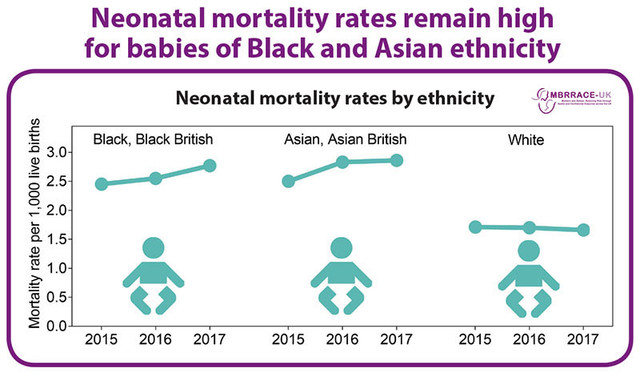 This year’s report collects information on babies who were born in 2016 but died either before they were born or...