Bereaved father Anthony Palmer will be running his third marathon in memory of his son Jacob and in aid of Sands next month.

Since Jacob died, Anthony has found running to be therapeutic. He has shared his story with us:

The 16th August 2016 should have been the best day of my life. It was the day my son would be born.

We had found out at our 20 week scan that we were having a boy and spent the whole pregnancy preparing for him; getting his room ready, buying all manner of baby things, going to antenatal classes and getting more and more excited in anticipation of his due date on 4th August.

We couldn’t have been more ready for his arrival, but he instead kept us hanging on until my wife Jackie finally went into labour on the evening of 13th August.

This was it, everything we had longed for was about to become reality. After several ‘too soon’ trips to the hospital, and two sleepless nights, we were finally told on the afternoon of 15th August that the labour had progressed far enough to stay in. We opted for the relaxed birth centre for the delivery.

Our baby’s heart rate was checked every 15 minutes throughout our time in the birth centre and everything seemed fine, but after spending all day in there and with labour progressing very slowly, we finally decided it was time to move to the delivery ward to get Jackie some pain relief.

One final check was done to make sure everything was fine with baby before moving. Another routine check was carried out when we got to the new room, but this time was different. There was no heartbeat.

He must be in a funny position, everything will be fine, I thought. Another midwife tried a different Doppler, there must have been an issue with the first one. Still nothing.

Another contraption came out, the midwives in the room told me that they would attach this to his head to pick up the heart rate, he’s probably just in a funny position so sometimes it’s tricky with the normal Doppler.

A third midwife attached it to his head, Jackie looked to me for the answer, but there was still nothing. Our son was here, we were a few hours away from meeting him after just under 42 weeks of waiting and now, in an instant, he was gone. It was like someone just switched off a light.

I didn’t know what to do, they certainly don’t prepare you for this in your antenatal classes. Jackie screamed, she told them they were wrong. All I could do was tell her it wasn’t her fault, while at the same time tell myself that it was mine.

The doctor was called into the room to scan as one final check. One last ounce of hope that he’ll turn on the screen and we’ll find out it was all a mistake. I knew the answer as soon as the screen came on and the midwives remained silent.

My thoughts switched to what happens next. No-one tells you what the procedure is when your baby dies before they’re born. I called my mom; she answered the phone with all of the excitement you would expect from a grandparent expecting news of the birth of their first grandchild.

I had no other words I could get out except “He’s died, mom”. Then it hit me, this baby still has to be delivered. After another 17 hours of labour, the whole time still clinging onto the hope that everyone had got it wrong, it happened. Jacob was born.

I’ve never felt an explosion of love like it. He was perfect. He was everything I imagined he’d be and more. That feeling that people had told me about when you see your baby being born was real and I felt it.

Except mine was quickly followed by very different feelings. I’d let him down, I didn’t protect him, I should have known there was a problem.

We got to spend three nights in hospital with Jacob. Those days were absolutely precious. Getting to spend time with him and having family visit to meet him allowed us the chance to make him ‘real’ to the world.

As days and weeks started to pass, we started to become very aware of the fact that we were still stuck holding on to Jacob while the rest of the world had seemingly moved on.

We turned to our local Sands group for support and for the first time had a group of people who really understood what we were feeling.

We learned that we didn’t have to move on from Jacob, but we could continue moving forward with Jacob always a part of our lives.

I decided in October 2016 that I was going to run the Birmingham International Marathon to raise funds for Sands, having done no running events previously. I quickly found running to be very therapeutic.

As someone that could easily find distractions to avoid having to deal with difficult emotions, running didn’t allow me to do that.

Marathon training meant having to spend a lot of time alone with my thoughts and it allowed me to start to piece my life back together while still feeling like I was doing something to keep Jacob’s memory alive. 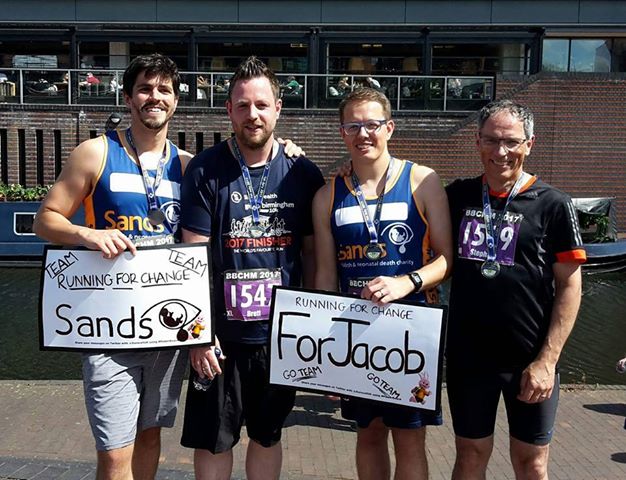 In the build up to the marathon, I signed up for several 10k and half marathon events to help with training, eventually completing the marathon on Wave of Light day during Baby Loss Awareness Week in October 2017.

Following this, I completed over 30 different events including 10k races, half marathons, mountain runs and the Manchester Marathon in April 2019, along the way completing a personal challenge of running 1,000 miles per year for each of the last three years. 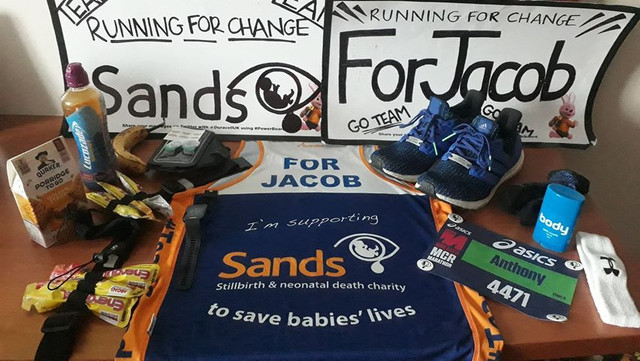 My next challenge will be the Barcelona Marathon on 15th March and again I’ll be running to raise funds for Sands. My online fundraising page is still open https://www.justgiving.com/remember/389968/Jacob-Ethan%20Palmer

For you little man.

Take on your own marathon in 2020 and run the Berlin Marathon this September! Sign up today and join #TeamSands.