After Charlotte and Rob Allen’s baby daughter Niamh died on the 9th October 2017 at 39 weeks and 3 days they vowed to do all they could to honour their daughter’s memory and ensure her legacy lived forever on.

Rob’s love of football led to him organising a football match at Northampton Town FC in aid of Sands on 23 May 2018 and, after the success of the match, the bereaved dads decided to form Sands United FC, in Northampton’s Nene Valley League. 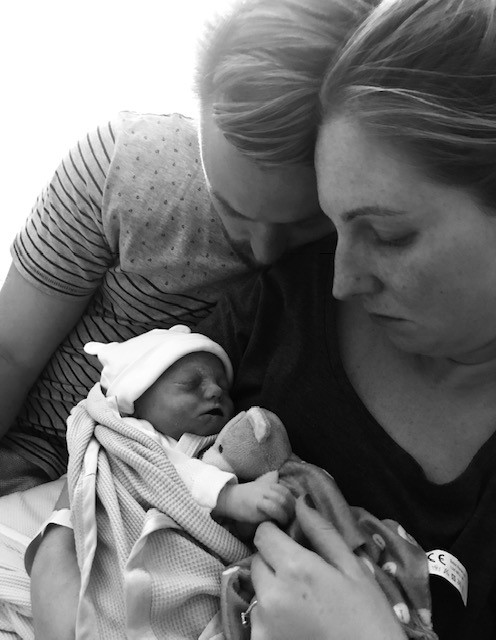 Charlotte Allen said: “The amazing feedback we have had since the charity football match in our daughter’s memory has been incredible. I am very proud of my husband as he took an idea and love of football and used it as a tool for helping with his grief and all the other dads who took part in the match.”

Rob Allen said: “Sands United FC has become a great support network through such a life changing event for us and all the other families. Some had losses many years ago but as we all know the pain doesn’t get any easier. We all want to raise awareness for our children but also for a charity that is very close to all our hearts for helping us in the most precious moments of our little ones lives.”

The Team has already raised more than £5,000 for Sands and been featured on Mirror.co.uk and Sky Sports News.

Most importantly Sands United FC has given the dads involved a support network where they feel comfortable talking about their grief and a way to proudly display their babies’ names on their team shirts.

“Sadly, the death of a baby is not a rare event and every 90 minutes in the UK – the length of a football match - a baby dies shortly before, during or soon after birth. Sands United FC is an amazing way to bring bereaved dads together and give them a chance to reach out to support each other while doing something they love. Wearing their babies’ names on their football shirts is a wonderful way to commemorate them and keep their memory alive and visible.

“When a baby dies the feelings of loneliness and isolation can be overwhelming and having other bereaved parents to talk to is vital, but we know that dads can sometimes be overlooked or struggle to find support networks.

“I’d like to thank everyone involved in Sands United FC for the money they have raised to fund our work supporting anyone affected by the death of a baby, working to improve the care bereaved parents receive, and promoting research to reduce the loss of babies’ lives.”

Sands is now hoping to work with the family who formed Sands United to encourage more bereaved couples around the country to set up teams – not just football but any sport – to channel their grief and help break the silence around stillbirth and neonatal death.

You can also watch the video the team have posted for Baby Loss Awareness Week 2018.