The death of a loved and much wanted baby is devastating at any time of the year, but perhaps even more so at Christmas.

Every year ensuring the Sands Helpline and other support resources are available to anyone affected by baby loss throughout this time, by running extended open hours is crucial, but we need your help. To continue to provide support, we rely on donations from our generous supporters and fundraisers.

Bereaved mother, Kim Ludlow, from St Neots, Cambridgeshire is supporting our Christmas Appeal this year and has shared her story:

My first born baby son, Bruce, died on the 15th December 2003 at 38 weeks gestation because he caught an infection in the hospital.

I was not induced and was kept in a hospital labour ward for two weeks. My waters broke early and my consultant decided that I could hang on for a bit longer.

We were taken around the special care baby ward and saw babies of 2lbs living and I wanted Bruce to be induced. The hospital was running down as it was moving to a newly built hospital and most of the time the monitors didn't work so all recordings were inaccurate. It was a situation that should never have happened.

Bruce’s death has a devastating effect on me and my family. We never even knew this could happen. And not for one second did we think Bruce would die.

We were in shock, as you would expect. Nothing like this had happened in our family.  I blamed myself for travelling up on a bumpy train to Edinburgh for work as that was when my waters broke.  I felt that it was all my fault. There must be many parents out there who blame themselves for losing their babies. I know I did.

My husband Richard said goodbye to Bruce. I couldn't bring myself to see him and I shut down. It was how I coped. But it is also now the biggest regret of my life. I went into protection mode for Richard as the level of ‘sympathy’ was always directed to me and not us. He never really had any support outside of our own relationship.

I found out about Sands via social media (and not from the hospital) and we then received support from the charity in the way of advice leaflets and booklets and a bereavement support pack that was useful.

I also attended a local Sands support group which helped me to talk about Bruce and my grief.

My parents were in the USA so they were not there when Bruce died which was very hard, as I'm incredibly close to them.  My father blamed himself.

During my parents’ last visit to the hospital before they went to visit my sister in Florida, the nurse was trying to find Bruce’s heartbeat and then realised the equipment she was using was actually broken.

My father passed away six years ago and a few weeks before he passed, we had a special moment where I asked him to take care of Bruce when he meets with him.  He was a great grandad to my two boys and he would have been great for Bruce too.  I know it sounds strange but it was just my way of coping.

I didn’t know what to expect when I returned to work after being heavily pregnant. Nobody made eye contact with me or asked how I was because they were also scared and felt awkward.

Losing a baby is not something anyone who has not gone through can fully understand and I accept that now.  But it is still very hard to hear people telling me: "It's one of those things".  I find it incredibly insulting to my loss and my personal experience.

The hospital took the joy and happiness away from Richard and I and we just have to live with that loss and accept it.

I hated my next two pregnancies and I've always felt that I never was as close to both my children when they were born, as I was protecting myself from getting hurt all over again. Now they get all of my love and devotion and they are both amazing young boys.

Christmas is always tough. Bruce passed away on the 15th December and we always light a candle in his memory and open up the small chest that has cards, poems, his hospital band, along with a lock of his hair, his footprints and handprints too.  He was real, he was mine and will always be with us.

Give the gift of support this Christmas

I’m supporting Sands this Christmas because I know at this time of the year bereaved parents like me think about their babies more when their families come together.  I miss Bruce and my father more when surrounded by family as we talk about those loved ones we have lost.

I know that not everybody receives the support they need at this time or even know that charities like Sands exist to provide vital help and support.  I would like to encourage you to support Sands’ Christmas Appeal and take part in an event with your friends to help them raise awareness and vital funds, which will enable the charity to keep their support services open this Christmas.

Without your help, Sands simply wouldn’t be able to extend their Freephone Helpline opening hours and provide other support services for parents and families during the festive season.

Make a donation today and give the Gift of Support. Your generosity will help us make such a difference to the lives of bereaved families and ensure that support is available to anyone who needs it this festive season.

If you have been affected by Kim’s story or need bereavement support, call the Sands Freephone Helpline on 0808 164 3332, email: helpline@sands.org.uk or visit our support page. 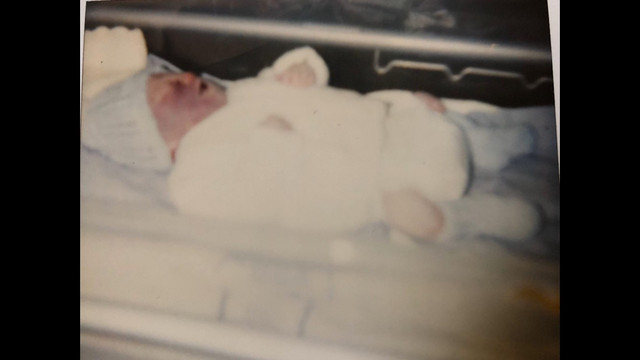