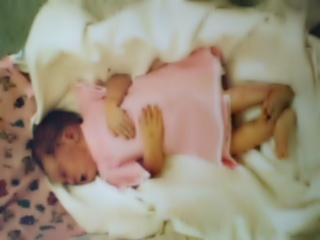 I was 38 years old. Alice was a twin. Her twin miscarried at 8 weeks. I had had one other previous miscarriage in 1994 at 8 weeks. I had been monitored closely, because of a long standing diagnosis of Hypertension before my pregnancy, but no one picked up any problems.

I was due to be induced at 38 weeks, but was discharged (on a Saturday) from the hospital by the midwife who preferred natural childbirth. She is now an independent midwife and speaks regularly in its favour on local radio. The anonymous doctor who signed my discharge papers never examined me, or even met me.  He was watching the Rugby World Cup.

My very active daughter died on 13 October 1995. She had a true knot and hung herself. No one told me this until a midwife told me it was in my notes when I had my son in 1997. I arrived to be induced on 14th October and told the midwife that my baby had stopped moving. I knew she was dead.  My life went into free fall. No one could help me out of this nightmare. It actually confirmed to me all my self-doubts about poor body image, not being able to do the most natural thing in the world, and self-blame. The hospital staff preferred to let me believe this than admit any liability.

I was offered ‘counselling’. I had to wait in the antenatal clinic for my appointment. I suffered numerous humiliations from other parents asking me where my baby was.  Each time, I felt like a hot knife was slicing through my heart. I felt so, so isolated. At times, I still do.

I have a wonderful son, but he is his own person and has never been a replacement for Alice.  I miss her every day. She would be 22 now. Would she have gone to uni?  Would she be a mum? Would she have been a terrible two, demon teen? I will never know. My family never talk about her. People get embarrassed when I do. They immediately think she must have been badly ‘deformed’ and was probably better off. She really has been forgotten.

My marriage couldn’t survive it. I am a totally different person. My hopes and any optimism died with Alice that day. My beautiful daughter.