Our baby was due in March 2020. It was my first pregnancy, and everything was completely fine right up until about 36 weeks, when I developed a liver condition called obstetric cholestasis.

This condition carries a small chance of stillbirth in late pregnancy, and so I was advised that it would be best to have an induction at 38 weeks. My husband and I followed this advice, and I went into hospital on 28th February 2020 to be induced.

At about 8pm they sent my husband home, and I was left on the antenatal ward. This was a difficult period; I was starting to have contractions, I was in pain and I felt very scared and alone.

When I asked for help, I got the impression that I was basically expected to take the pain relief and get on with it – childbirth is painful. At around 3am I asked the midwife to come. She said that I still was only 1cm dilated so I could have some pethidine. She also said that it wouldn’t be that long, so I could call my husband Nick.

We only live about five minutes away from the hospital, so he was there very quickly. Once he got there, they monitored the baby’s heart rate for a short time to check that everything was OK, and then gave me the pethidine. The hospital has since lost all record of this monitoring, so we have no way of knowing if everything was actually OK at that stage.

During our antenatal classes we had also been told that you shouldn’t be given pethidine if you are close to giving birth as it can make the baby sleepy. I still wonder if the administration of this drug had an impact on our baby’s recovery. Between 3am and 6am my waters broke. Nick went to get the midwife to come back, as we had been left by ourselves on the antenatal ward for most of this time. Although I was in active labour, the hospital was understaffed so were unable to accommodate me on the labour ward.

When the midwife came, just before 6am, she realised that the baby’s heartbeat was dropping and she pressed the emergency button. We were then rushed through to a labour room.

Our baby, Barney, was born 17 minutes later, at 6.05 am, with the help of a suction cup. We found out later that I had had a placental abruption while in labour, so he hadn’t been getting enough blood or oxygen.

They took Barney to one side straight away and began attempting to resuscitate him. They were working on him for about an hour. We now know, from the Healthcare Safety Investigation Branch (HSIB) report, that during this time they delayed calling in a more senior doctor and failed to give him the blood transfer that he needed in a timely manner and began to cool him when they shouldn’t have, making him dangerously cold.

Once they did get him back round, they took Barney upstairs to the special baby unit, and then a couple of hours later my husband and I were allowed to go and see him. We held his hand and spoke to him, and he opened his eyes and looked at us. I am so grateful that we got to have that moment of connection with him.

We were told that they were going to stabilise him and then transfer him to a different hospital who were specialist in cooling and brain damage prevention because he had been without oxygen for so long.

While the transfer team went to get him ready, we were taken to a different room. About 20 minutes later they came back to say that he had had a heart attack and they had been working on him again, but they couldn’t revive him.

We had to go and say goodbye at that point. We were taken back into the room just as they were pronouncing him dead and that is a moment that will continue to haunt me. Afterwards we met with the bereavement midwives and the consultant and they tried to explain what had happened. We were able to spend three days in the Sands Butterfly Bereavement Suite at the hospital with Barney, which while difficult also helped us so much. His grandparents were able to come and visit and hold him and the Sands photographer took some pictures of him which we really treasure.

The postmortem didn’t find anything wrong other than the abruption, which meant that he hadn’t been able to get enough oxygen, otherwise he would have been a perfectly healthy baby boy. It was explained to us there would be an independent report from HSIB as well as the hospital report, because of the nature of what had happened.

The report was obviously really hard because it threw up a lot of things that we didn’t know at first: being left unmonitored on the antenatal ward and the mistakes during resuscitation meant that the outcome for Barney could have been different if things had been handled differently, so it was a bit of a shock. We’d assumed everyone had done their best and they had, but there were still failings in care which we weren’t aware of. 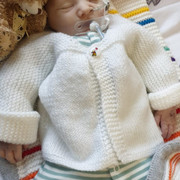 We have since had another baby boy. His pregnancy and birth were, as you would expect, very stressful. He was born via a planned Caesarean section. On arriving at the hospital for this, we were told that they were four midwives understaffed. Had it not been for two excellent midwives who had come in to support us on their day off, I think we would have turned around and gone home.

My experience through both births has really made me lose confidence in the healthcare system, there are some excellent individuals doing their best, but the system doesn’t work. We would have liked to have had another child, but are now reconsidering it, as the stress and risks that come with it seem too high.

Gemma shared her experience as part of a research report published in July 2022 by the National Child Mortality Database (NCMD), which shows that better support and care for women during pregnancy and birth could save babies' lives and children who die at older ages.