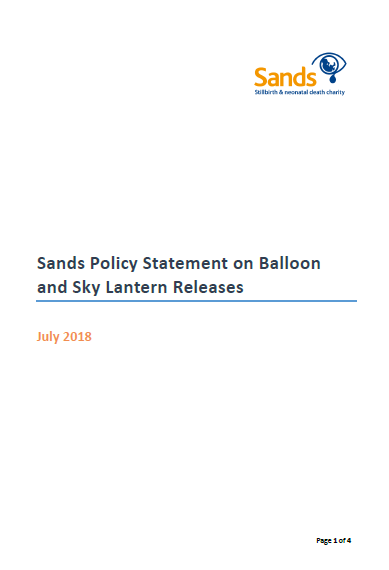 Sands Volunteers and supporters have for many years used balloon releases as a way of raising awareness and remembering their babies who have died, and we recognise that these events hold great impact and significance for bereaved families. Over recent months and years the environmental damage done by balloons to wildlife and oceans has become recognised, and opinion on releases both from Sands’ members and the general public has changed. The reputational risk to regional groups as well as Sands nationally is increasing, alongside the significant damage caused to the environment by such events.

Sands seeks to support bereaved parents to remember their babies in ways which are both personally significant and which have an impact on raising awareness of the issues around baby loss, but without compromising the environment or distracting from Sands vital work around baby loss.

It is now widely known that balloon and sky lantern releases have the potential to impact adversely upon the environment.  Sands takes its responsibility to protect the environment very seriously.

1. There is a risk of harm or death to wildlife and livestock (ingestion, entanglement, entrapment, panic) from released balloons and sky lanterns.

3. Both contribute to the defacement of land by litter and waste.

4. Helium supplies are finite and scarce – and are needed for machines such as MRI scanners.

Sands will therefore not encourage the use of balloons or sky lanterns for releases and will work actively with supporters and volunteers to find environmentally friendly alternatives.

Many councils and local authorities are voting to ban balloon and lantern releases.

Sands does not support the release of butterflies for remembrance events due to the following wildlife concerns:

There is concern from the RSPCA and other animal welfare charities about the use of doves in releases for events and again in terms of animal welfare and environmental issues Sands is unable to support dove releases.

Biodegradable balloons are damaging to the environment as they take 4-5 years to degrade and have the same potential impact on wildlife. While much of the balloon might disintegrate over time, the knot and some of the latex remains long after you said your goodbyes, while their strings entangle wildlife.

Sands will therefore not encourage the use of bio-degradable balloons for releases.

We have collected together many very special alternatives to balloon releases which Sands volunteers and supporters across the country have suggested/used. These include:

This is a blog written by a bereaved Dad about balloon releases and beautiful alternatives.

Get in touch with Sands Fundraising team to discuss the suggestions further or to share your own ideas.